With the expansion of the Panama Canal have opened up new growth opportunities for Panama. One of these sectors is energy, and particularly electricity generation from liquefied natural gas.

The development of new energy sources contributes to the diversification of the energy matrix in the country and offers the possibility of turning Panama into a hub distribution of Liquefied Natural Gas for the entire region. 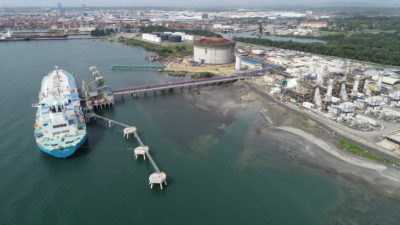 With an investment of $ 1.15 billion and in a record time of 27 months, the first natural gas-based power plant and the first LNG reception terminal in Panama and Central America were inaugurated in August 2018.

The natural gas-based power plant uses combined cycle technology for its efficiency and contribution to the environment. It reuses the heat of the exhaust gas from the gas turbines to obtain steam, which is then used by a steam turbine and to save fuel in the production of electricity.

This power plant is 50% more efficient and requires one third less water than conventional plants. In addition, the project included the construction of a terminal with a tank that has a storage capacity of 180,000 cubic meters of liquefied natural gas, enough to supply AES Colón and new generation plants that are built or converted for the use of natural gas. , as well as to promote the development of other uses, such as fuel for vehicles or the fuel supply of the ships that transit daily through the Panama Canal.

It also includes a dock for ships between 3,000 m3 and 160,000 m3, a regasification facility and a terminal for loading trucks for the distribution of LNG.